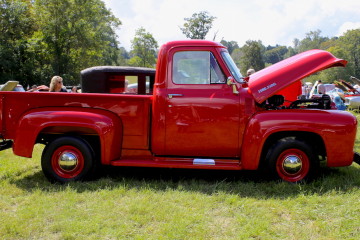 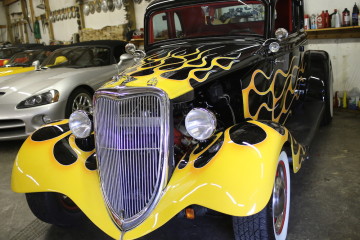 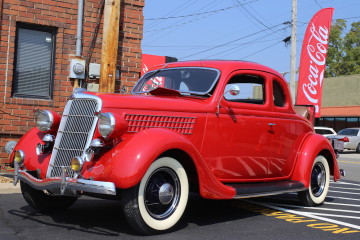 Lisa and Larry Whitehead wandered up to The Bus in Baton Rouge and we hit it off immediately. Larry is thoughtful and reserved; Lisa’s bubbly and attentive personality makes you feel like you’ve been friends with her forever.

The couple is part of a car club called Gearheads of Buda, Texas in their town of – well, Buda, Texas. As the club’s website states, they started as “a loose knit group of like minded individuals with a common interest in American cars,” helping each other source parts and fix things.

With a history of philanthropic activity, this extraordinary group of gearheads have contributed scholarship funds for their community totaling over $25,000 since the early 2010s. The money is raised by their annual car show and allows opportunity for college students to attain certifications for technical trades in industries such as electrical, welding, automotive and diesel mechanics, and bodywork. YES! Go Buda Gearheads! Thank you for making a difference in your community!

Back to the Whiteheads – after chatting for a bit, we headed across the grass to see Lisa’s 1960 Chevrolet Parkwood Wagon.

Growing up with a history of station wagons in her family and a dad who was very active in the garage, Lisa developed an appreciation for cars (particularly wagons) at an early age.

“When I was very young, I always wanted to “help” my dad when he was in the garage. My dad is very talented; he welds, is a blacksmith, does woodworking, painting, and has many other talents,” Lisa recounts.

Her husband Larry (who Lisa calls her “Legend” due to his knack for fixing anything) also came from a family of mechanics – his father was a mechanic with the Air Force by day and worked on cars in the evenings with his sons. When Lisa and Larry met it was natural for them to bond over cars – their courtship evolved while working on Larry’s Buick Skylark.

Down the road, they snapped up a Dodge Magnum wagon but chose to trade it in a couple years later for a handicap accessible van to accommodate their adopted son. When Lisa missed her station wagon too much, Larry began searching for something that would work for everybody, including their son.

What he found in May of 2010 was a 1960 Chevy wagon from Colorado with a 283 motor and cast iron power glide transmission that was found in a field buried to the frame in mud; it had been pulled out and painted a flat black all over before being put up for sale. The car ran but had no brakes and a dilapidated front seat. The Whiteheads planned a mini vacation to Colorado and brought it home to begin some renovations.

After replacing the worn out brakes with front disc brakes and a left drum in the rear, Lisa began driving it around town. After three years of cruising in her flat black wagon, it was time for some upgrades. Larry found a drag-racing truck with a 5.3 liter Chevy LS3 and 4L60E automatic transmission and swapped it in. Disc-brakes were upgraded with hydro-boost for more stopping power. Then, it was time to make the Parkwood pretty.

The roof was painted a pearl crème in the back and undercoated pink in the front with two sizes of iridescent flake. Window frames were also painted with pink flake and pinstriped with a custom lace pattern. Lisa finished out the rest of the “paint” job by creating a beautiful patina with muratic acid and peroxide and sealing it with Shark Hide. Details like hand-set Swarovski crystal Chevy emblems and a Peckerwood insignia on the back end make the car truly personal. 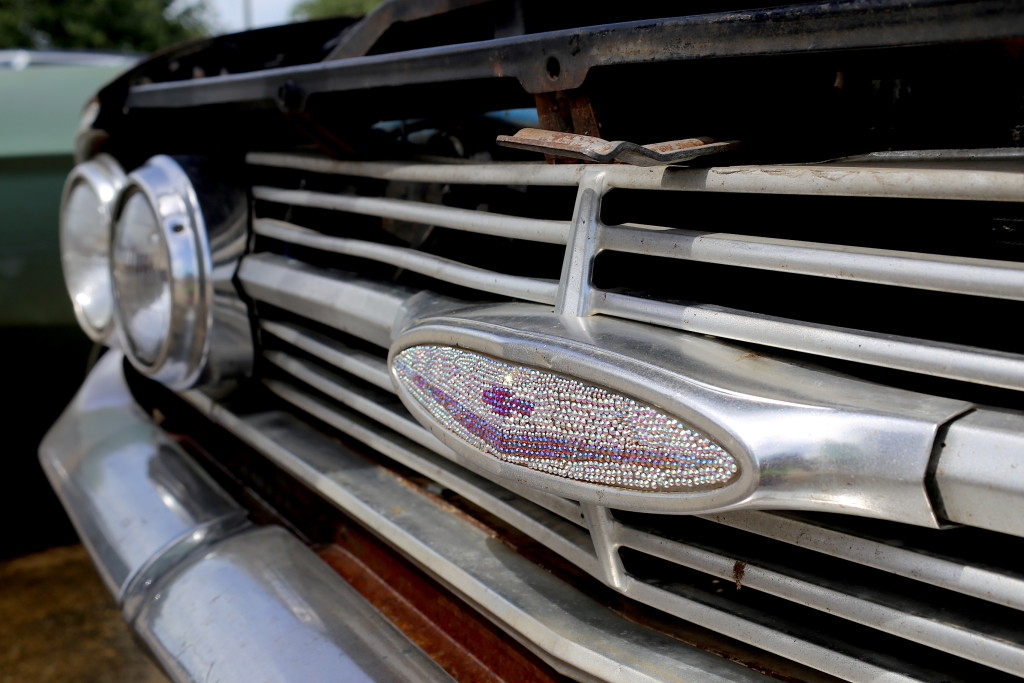 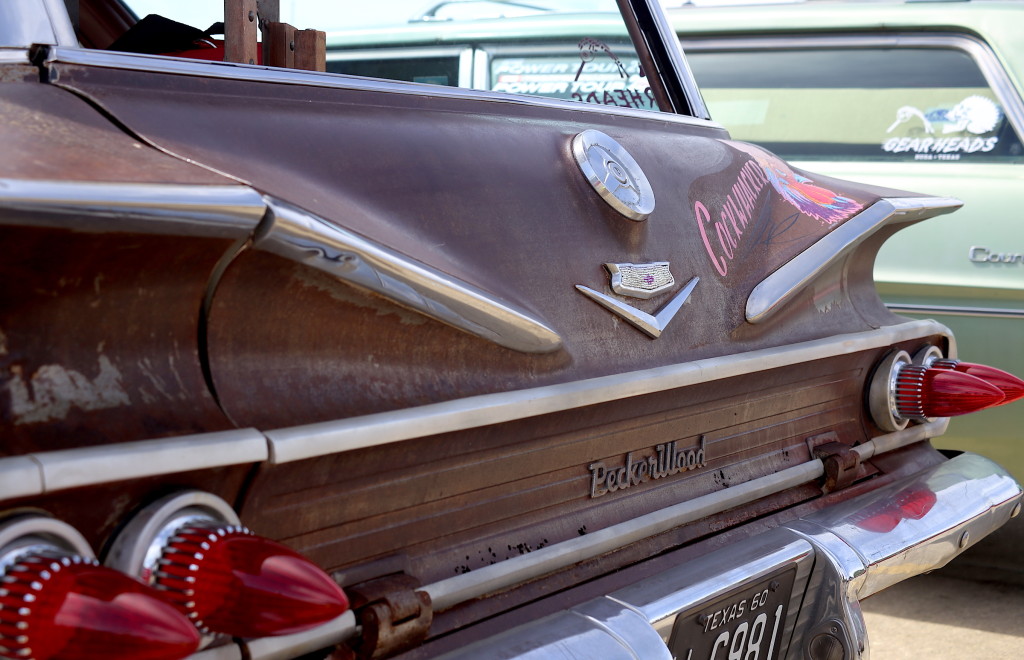 On the interior, Lisa’s talents truly shine. Custom upholstery blooms coral, pink, brown, and orange on seats and tailgate, which opens up into a comfortable seat as well. Wooden door panels and Lizard Skin coating throughout with a coat of brown add to the atmosphere. Woven rattan and sisal rugs on the roof and floor boards complete the look. All of it matches the original coral dash, and the interior light is an old, rusty open-fire popcorn popper tray. 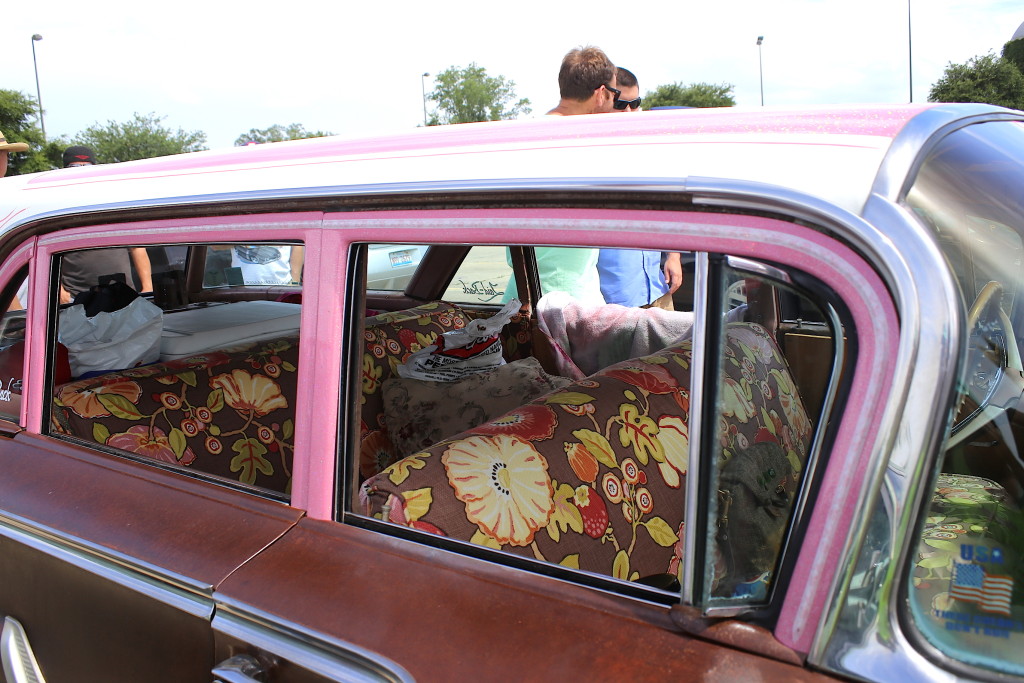 What began as a buried, forgotten relic has become a beautiful, personalized piece of driveable art. Lisa and Larry are an inspirational couple who have taken something that they love and turned it into something that builds community and relationship; something that makes a difference in the lives of others and gives hope to their local youth.

A special kudos to Lisa for making an imprint on what is normally a male-dominated scene. It allows other women to imagine something out-of-the-box for themselves. I mean, I had some pretty serious wagon fever after I met her and the Parkwood.

Keep on driving the way the arrow on your door points – straight ahead! We’ll see you on the road. 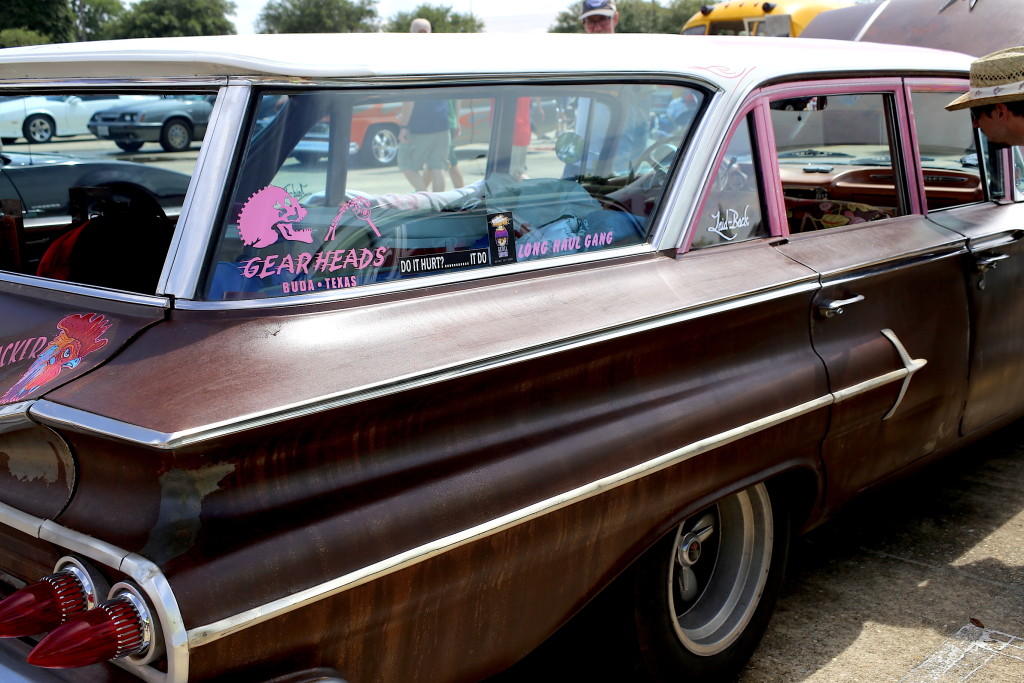